What is a Sure Start Maternity Grant and how do I claim it?

Coronavirus: What does the Chancellor’s Winter Economy Plan mean for families and employers?

On 24 September, Chancellor Rishi Sunak delivered his Winter Economy Plan, setting out plans to continue to support individuals and businesses impacted by COVID19.

The Chancellor recognised that, despite the Government’s interventions to support businesses and individuals, the UK is still facing profound challenges and significant job losses, and the focus of his interventions is on supporting ‘viable’ jobs.

Details of some of the key announcements are set out below.

The Chancellor confirmed that the furlough scheme will come to an end in October, as previously indicated and, in its place, there will be a new Jobs Support Scheme, which will run for six months starting in November.

The scheme will support “viable jobs” so employees must be working at least one third of their normal working hours, and be paid for that work, as normal, by their employer. The Government, together with employers, will top up their wages to cover two thirds of the pay they have lost by reducing their working hours. Anyone who, as of yesterday was employed, is eligible.

Running from 1 November to the end of April, all small and medium sized businesses will be eligible to apply. Larger businesses will only be eligible when their turnover has fallen as a direct result of COVID19. Businesses are eligible even if they have not previously used the furlough scheme. The Job Support Scheme will be capped at £697.92 per month.

The Government has produced a useful diagram illustrating how this will work in practice: 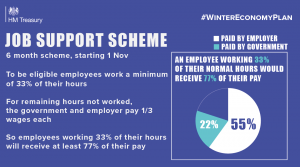 Employers who use the Job Support Scheme will remain eligible for the UK wide ‘Job Retention Bonus’ which was previously announced by the Chancellor in July, providing a one off payment for employers who retain staff who were previously on furlough.

While this scheme may provide some relief to many employers, there are still concerns, particularly:

It is likely that this support may save some jobs, but not all – and we will still see a significant rise in unemployment across the UK. It is essential that the Government now commits to meaningful job creation, upskilling programmes and delivers a strong social security system to support those who are at greatest risk of being pulled into poverty. That means retaining the temporary £20 increase to Universal Credit and Working Tax Credits, and extending this to people on legacy benefits.

Support for the self-employed

The chancellor confirmed that the support scheme for those who are self-employed will continue on “similar terms” to the existing job support scheme. The Self-Employment Income Support Scheme extension will support ”viable traders” who are facing reduced demand over the winter months, covering 20% of average monthly trading profits via a government grant. This may still pose a significant financial challenge for individuals who are continuing to experience a loss of income. There may be other support available, for example Universal Credit, so we would encourage anyone who is self-employed to contact or Family Benefits Advice Service for guidance.

Today’s announcement also included confirmation that the temporary VAT cut for the hospitality and tourism sectors – from 20% to 5% – will be extended from 13 January 2021 to the end of March 2021. During this time, the reduction in VAT will cover food, non-alcoholic drinks, accommodation and attractions.

The Chancellor announced a new “pay as you grow” scheme for businesses which took out Government guaranteed loans during the crisis, and extended the period of time of which loans can now be repaid, without impacting on their credit rating.

Businesses who deferred their VAT will no longer have to pay a lump sum at the end of March 2021. They will have the option of splitting it into smaller, interest free payments over the course of 11 months.

We would encourage any individuals or employers wishing to find out what financial support they may be entitled to, to contact our Family Benefits Advice Service for free, impartial and confidential advice on Freephone 0800 028 3008.